I have a poem up at Literary Mama in their June issue, which focuses on fathers. My poem, entitled “What the Digital Sign Flashed at Me as I Drove Downtown,” was written on my birthday in 2012, a week after my dad told me that his lung cancer had returned, this time in his spine. Only six weeks after writing this, he was gone. I don’t have the picture described in the poem handy, but here’s one of us in 1977 at my grandparents’ house, with me congratulating my father on a running trophy. 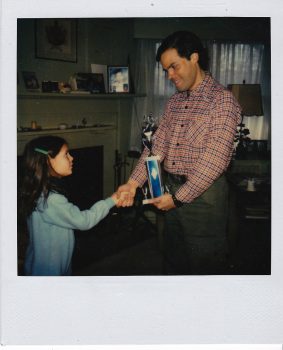