I’m so excited to have some pieces in Wanderlust, an online journal “dedicated to travelogues, trip reports, photographs and nonfiction essays taken from unique experiences on the road. In these stories there’s an open sense of adventure and innocence, one that takes a personal experience and taps into something universal. A narrative map is the result.”

They are featuring three photographs and two poems: “Make Believe” (written about a trip to Rome I took in 2016 with my husband, son, and daughter, who joined us from Turkey where she was on a teaching Fulbright) and “How, Drinking One Monday in Massachusetts, I Remembered What I Felt on the Carrer de Mallorca in Spain One Long-Ago Winter” (a kind of meditation on faith inspired by a European adventure I took with my best friend in college). They chose three photos I took in Rome, including this one of the Colosseum at night: 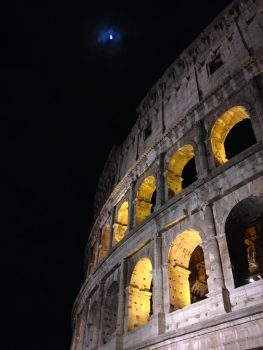